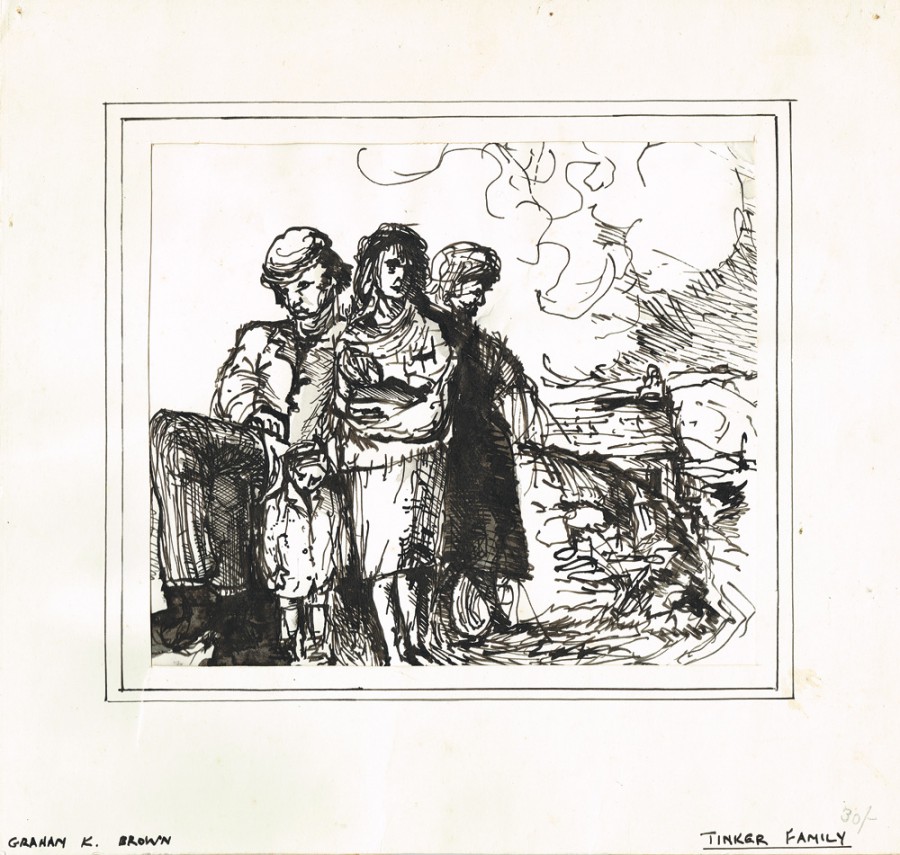 I received an email out of the blue a few weeks ago,  which contained a lovely surprise.

A gentleman called Tom in County Mayo, Ireland wrote to say he had bought this drawing on Ebay in Ireland, and then having come across our website, wondered if the Graham K. Brown noted on the bottom left of the drawing was our Graham Kingsley Brown!  I was excited. Indeed it was. What a delight!

A few emails later, and it transpired that Tom was keen to gift the drawing to the family, and duly posted it to me. So it arrived in my hands across the Irish Sea,  and in time for my birthday in late February too – what a great retrospective present!From being sold for 30 shillings in Ballydehob, West Cork, to a gentleman art collector from the Dublin area (whose son it was who put the drawing on ebay)  it has returned home to us almost 45 years later. Elizabeth (Mum) doesn’t recall where and when the drawing was sold, but it was probably from the art and craft shop called  “The Flower Shop” in Ballydehob before 1970.  The shop, and its owners are mentioned in a book “West Cork Inspires” by Alison Ospina published in 2011.  The book desription there gives a sense of the milieu of that era:

“During the 1960s and the following decades a significant number of artists and craftspeople began moving to West Cork, following their dream of a simple life in an unspoilt landscape. They were attracted to West Cork in particular by the stunning landscapes and low property prices but as the creative community grew, it became an attraction in its own right. For a brief period, a rare combination of circumstances existed in the region which facilitated the growth of arts and crafts in West Cork and gained the region a glowing reputation for its unique culture, combining a laid back life style with traditional country living. West Cork Inspires tells the story of the creative community in West Cork and profiles twenty-two of its most outstanding protagonists.”

We were immersed in that environment at the time – Dad worked with Chris and Nora (mentioned in the book)  in the local pottery, and we attended their chilren’s art classes, so it is lovely to have that reference to the shop in the book.

Tom tells me that nowadays it is not de rigeur to refer to travelling people as “Tinkers“, – that was, however,  the word in common use in the 70′s,  so it’s use in the title is intended as a straightforward description. Today they would be referred to as “Travellers” or “Gipsys”.

Amongst Dad’s work, it’s a rare example of a figurative pen and ink drawing in this style, with its trio of adults, a baby in arms and a child. The central figure of the woman with child is the visual and emotional anchor for the picture, as she holds her head up, looking out and to the right while the husband, the grandmother and the son all cast their eyes and head downwards. The shadowy older woman to the right has a brooding quality, and the oversized, but smart jacket on the young boy carries an air of unease. So perhaps the drawing  hints at a mood of struggle and economic uncertainty, as it depicts the family huddled, but noble, in the foreground, with a humble Irish stone cottage and natural landscape behind. Dad did produce other similar drawings at the time, but we no longer have them, or images of them.

Its a timely gift for us as well, as various members of the family are again uprooting and moving home as we did in 1971. Then we crossed the Irish Sea back to Graham’s home in Lincolnshire, to help him recuperate from illness. England seemed tame, dull and rigid in comparison to the wildness and freedom we found in Ireland, a freeness which this drawing captures.

Thanks so much to Tom for his generosity in helping it find its way back to us. This  drawing is now on the website, in a new gallery of drawings which includes a set of pen and ink landscape drawings done from imagination in the later 1980′s.