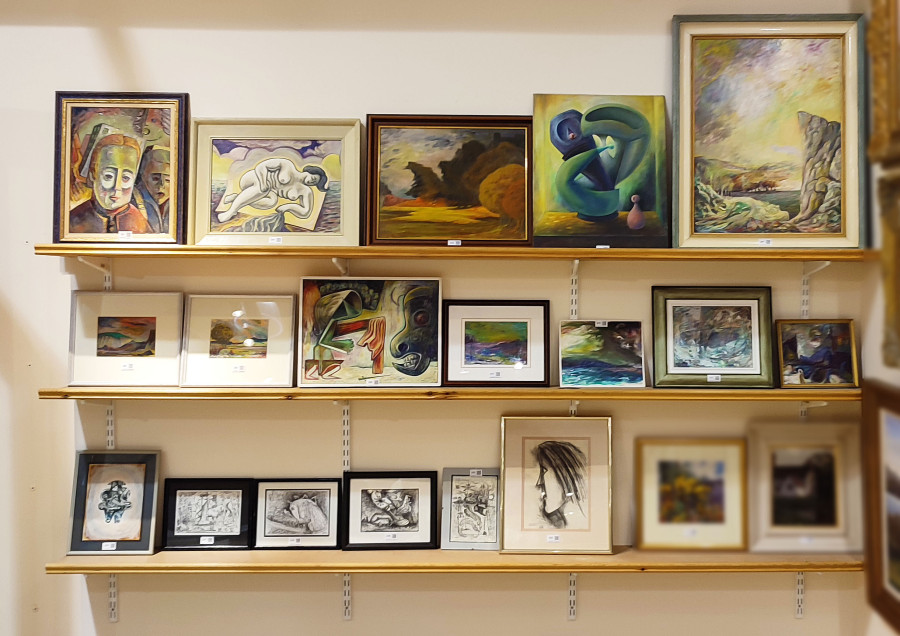 13th September 2022 turned out to be a significant day in our family for a number of expected (and unexpected!) reasons*. For our purpose here, it was memorable for being the first day that a selection of Dad’s (Graham Kingsley Brown’s) artwork was exhibited for sale since he died 11 years ago. The time and contacts had never been right before, despite various attempts. Then, thanks to my acting on a hunch, which was picked up by David Duggleby Fine Art Auctioneers, things came together.  This is how it happened.

In 2021, my husband and I moved from Greater Manchester to the East Riding of Yorkshire – a location which was dictated by the choice of a particular property, rather than by design. Oddly, it was not until we were living in the East Riding that it struck me how many connections I already had to the area through my Father.

Graham had been born and worked in Hull, where he had also met my Mother Elizabeth, and had ties both as a wartime evacuee and Grammar School pupil to the town of Beverley, a mere 20 miles or so from where I was now living.  I also knew of earlier ancestors in the family tree who had lived there. Dad gave very little away about his youth in Yorkshire and most of our life as a family had been spent elsewhere (although we had lived twice on the other side of the Humber in Lincolnshire  – see About Graham K. Brown for a biography).

In search of that lost paternal family history, I went on a day trip to Beverley for my birthday in the Spring of ’22, to see it for the first time. I  enjoyed imagining the young Graham seeing the same things I now did, perhaps being inspired by the sculpture and scale of Beverley Minster, maybe seeing the paintings of Fred Elwell and Mary Dawson Holmes (who would have been painting in the town while Graham was there), or visiting the same art gallery I was now in, doing athletics in the green fields of the Grammar School in the 1940′s, and walking hand in hand in the 1950′s with his young wife to be Elizabeth in the Westwood pasture (a fond memory of her’s). 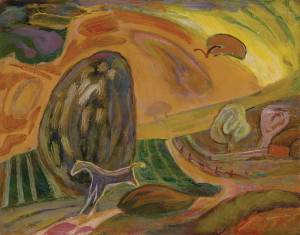 The Fleeing Horse – horse in a rural landscape. Oil on board unsigned 23cm x 29cm by Graham Kingsley Brown.

I kept my eyes out for the “manor house” Dad had mentioned where he and his brother had been evacuated during WW2 which I was keen to find but only had a vague description to go on. One track led me to the house of George Odey (later an MP) on Keldgate;  another later came unexpectedly from cousin in Hull, who said out of the blue, that she (amazingly!) knew what the address was.  We met up in the town, and visited the house, which was on Hengate. I particularly noted the lovely gardens (which Dad mentioned), the ceramic tiles on the patio (was this a forerunner to Dad’s interest in tile design?), and an astonishing view to St. Mary’s Church from the lawns. 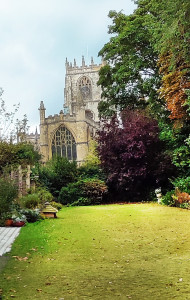 Churches featured in a few of Graham’s paintings, but more than anything, the romantic light and view of the gothic building seemed to evoke the kind of natural religious devotion Dad exhibited. Across the road, there was a striking model of a white horse above the door at the Inn of the same name at no. 22 Hengate – which immediately brought the poem “White Horse” of Dad’s to mind (“Nothing lovely stands as still   As the white horse on the hill…“).

These pointers to Dad’s earlier experience were intriguing. In attempting to explore and interpret an artist’s work, early impressions can be helpful clues – but Graham rarely spoke about these or what influenced him! Looking back at what has been is valuable for what it reveals about the present. The need to find a way forward with Dad’s artwork was, however, pressing on me, particularly as I wished to do so for my Mother’s benefit, so she could experience some progress during her lifetime. Resting outside in the sunshine in a cafe in the Wednesday Market that day, my mind stimulated by these imaginings, I was wondering what I could do, when a shopfront nearby caught my eye.  I wandered over. It was Sunday so the office was closed. I made a note of the contact details. 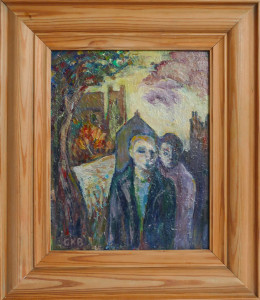 Mysterious figures with church scene – Acrylic on Board, 2009 by Graham Kingsley Brown.

From Conversation to Studio Sale

A few days later, I phoned that Auction Valuation Office in Beverley, and was advised to send further information and links by email to Mr Duggleby, their Fine Art expert, which I did. I heard nothing. As you might imagine,  it’s a bit nerve-wracking exposing art – Would it be liked? Was it suitable? Should I give up? (Of course to the Auction House, this process is all very run-of-the-mill, and they will be experts not only at selecting, but also rejecting.)

I tried again. Again nothing. I felt a little disheartened, but persevered. Another phone call some time later – I had sent it to an email address that was no longer being monitored…another email. Then, finally, a phone call from Mr David Duggleby at an unexpected moment.

The conversation with Mr Duggleby, (Director, Auctioneer and Valuer) was encouraging and enjoyable. It resulted in the offer of a Studio Sale of Graham’s work to be featured in their Autumn Art Sale, at the Vine Street Salerooms in Scarborough. It was to be “about 20 pieces” and, given Graham’s signature versatility and multi-media output, it was recommended that it be presented across three genres – Paintings, Drawings, Three-Dimensional pieces.  Work would be exhibited from 13th September, with the auction taking place both at the venue, and online.

I set about selecting a set of suitable works in these categories, of mid range quality, with some key pieces as highlights,  so we could run this experiment and see what might attract sales.  This resulted in a mix of early, later, abstract, figurative and differing subject matter, and most of which (in the case of paintings and drawings) were framed.  Happily, because there are visual images of all the work, I was able to agree a draft set by email, before taking the actual work for valuation at the Scarborough offices, where I met Mr Cox, who was to be the main contact.  I could hardly contain an inner joy, as we talked, as I was so inspired by the opportunity to talk about Graham’s work in artistic terms to Mr Cox who was positive, enthusiastic, and interested, after the somewhat solitary, but extensive efforts I had made to catalogue the work, and make it available – and so on.

There followed the necessary pragmatic actions and checks to get to the catalogue stage (valuations agreed; catalogue entries checked; biography written and adjusted; images sent; a poem selected to include; press release checked…) and all was in place by 13th September for the auction on the 16th. I looked foward to it with optimism and delight, but remained happily neutral about outcomes. The worst that could happen would be we would sell nothing, but have auction fees to pay, which we accepted.

Two articles, both illustrating the sculpture lots for the auction, were published in the local press on 13th September - The Hull Mail and The Grimsby Telegraph. (I wondered what Graham’s father Lesley Brown, a former Chair of the Grimsby Chamber of Commerce, and local businessman, would have made of it! )

Graham’s lots at the Auction on the 16th were at the end of the Autumn Art Sale. My hushand and I attended the auction and were intrigued by, and admiring of, the speed  and effectiveness of the process. The first piece was sold – a highlight piece “The Departure“, topic of a previous blog and also illustrated in the paper. Another followed, and another, another, some with competing bids with Mr Cox as auctioneer.  It was clear there was interest. We were enlivened by it.  And again later, a couple of pieces sold during the “Make an Offer” phase over the following month.  So in all, over half of the work sold. A very pleasing outcome. 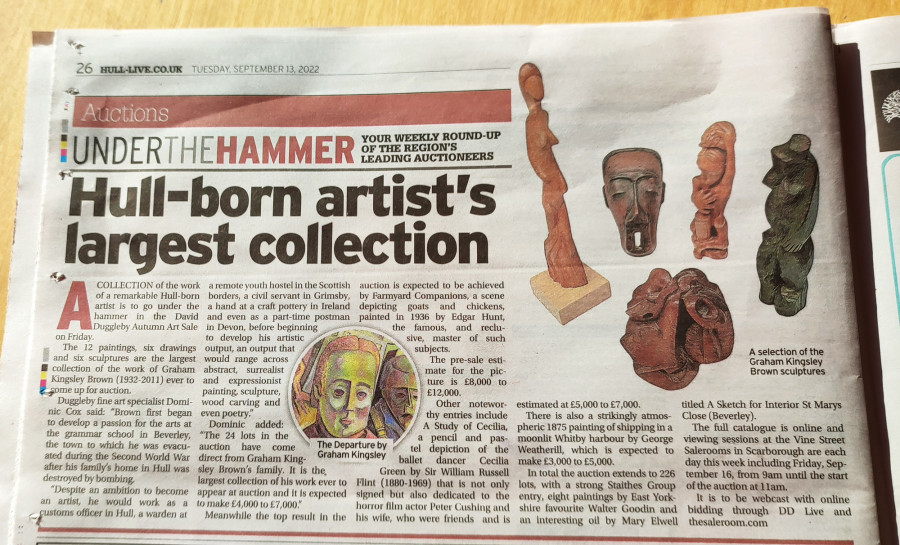 Since the first auction, we have run a second, smaller consignment with the same Auction House, at the Winter Art Sale – again with some success.

Above all, everyone in the family is pleased that Dad’s work is “getting out there” again – being seen, appreciated, providing stimulation and enjoyment for others, as it should. For so long it has been hidden, in the dark – giving it space to breathe, expand, bringing it into the light and distributing it to different locations amongst different owners, is what we wish for it. Graham was no self-promoter; he was a creator first and foremost.

Building on this initial auction promotion, we aim to continue finding outlets for collectors and art lovers to acquire and display the original, varied, and unique art of Graham Kingsley Brown.

*These other out-of-the-ordinary things happened in the family on the 13th September 2022, to add to the intensity and significance of the day!

A day to remember in Dad’s Own County indeed!