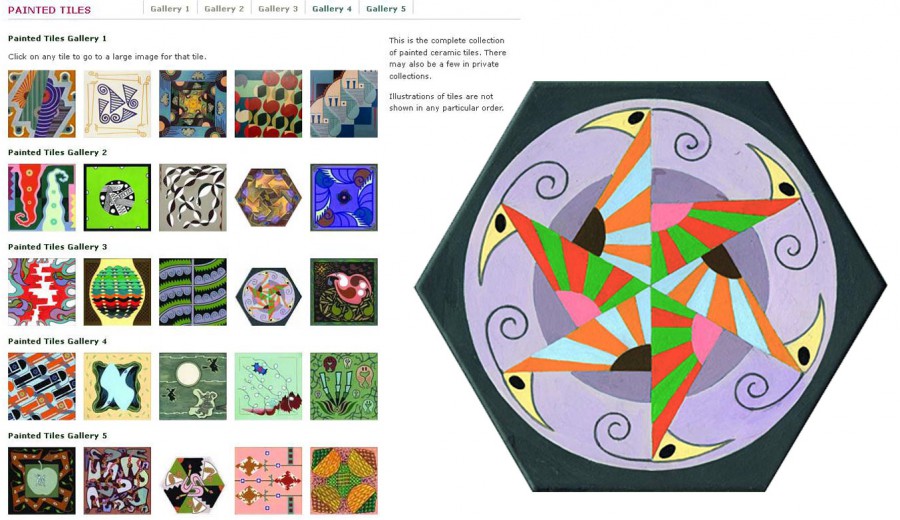 From original scans of the collection we have of over 20 ceramic painted tiles,  all five galleries of “Painted Tiles” on the website have now been populated.  These ceramic tiles were painted when Graham was focused on doing a range of geometrical pieces during the 1990′s, which included work on objet’s d’art. Two of the tiles are dated 1991, including the “Three witches on broomsticks with full moon” and the tile with four painted greek columns. They were, I know, produced for both reproducing as actual tiles that could be used in interior design, and also as one-off pieces in their own right.  They have not,  as yet, been used for actual tiling, however.

Abstract, geometrical, metaphorical, characterful or humorous, they  play inventively with shapes, rhythm, repetition, symbolism and colour in a kaleidescope of forms. Some are straightforward in content (for example the “Adam and Eve“), others are more mysterious (for example this one) and prompt us to explore what they may mean. We can speculate, but ultimately, we may not know – some  of them hint at internal processes and intutions, which are perhaps stronger for not being articulated. If anything strikes you about them or their meaning, do let me know.

I hope you enjoy exploring them too – the visual colour arrangements are wonderfully nourishing, I would suggest.