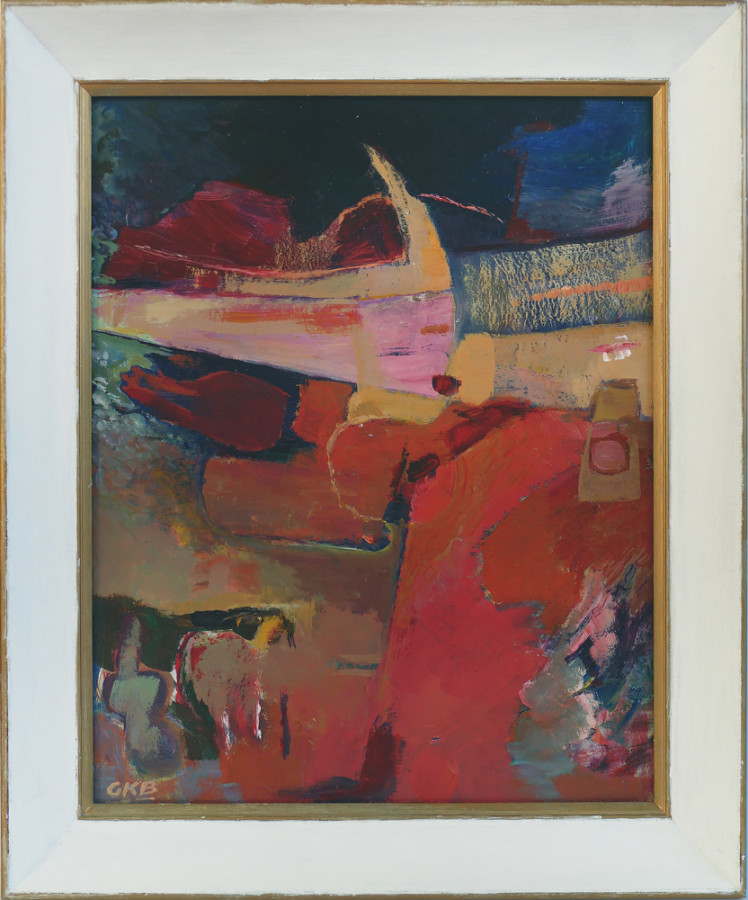 To celebrate the anniversary of Dad’s birthday, allow me to tell you about the unexpected recent emergence of 2 pieces of his artwork.

During a holiday in North Devon in December 2019, I arranged to meet up with Dad’s good friend Gerard at the Burton Art Gallery cafe in Bideford (a favourite haunt of Artists and Coffee-and-Conversation lovers alike – including Graham, when he was alive).  Not only did Gerard provide warm, deep and stimulating conversation, he also gave me a painting and a sculpture which Graham had entrusted to him, for the collection. 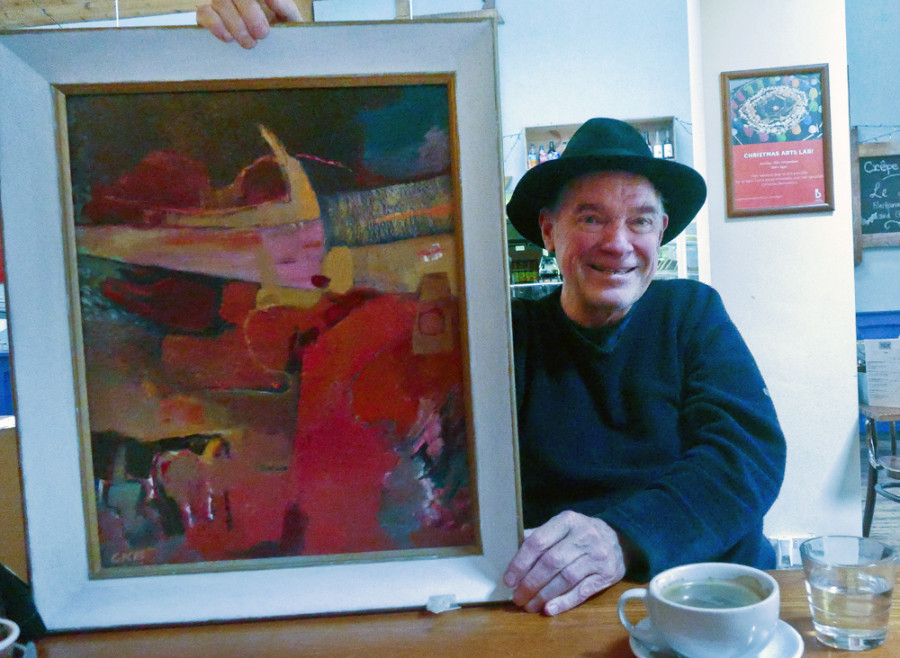 Firstly, this large painting of an abstract landscape in warm earth tones enhanced by some vibrant blues, was unwrapped to my great delight – I had never seen it before! It was inspired, Gerard said, by a recently published book by the Nobel prize winning Irish poet Seamus Heaney on the theme of ground uncovered -  a painting, he also said, of which Graham was very proud.

As with all artwork that does not aim to merely present a pleasing appearance, one needs to delve deeper to search for the meaning, symbolism and intent behind the piece in order to appreciate and understand both it and the person who created it.  In this case, the imagination can consider the theme of digging deeper, finding what is authentic, breaking up existing ground to uncover geologic layers, perhaps sedimented over truth.

Secondly, this small sculpture entitled “Don Quixote“, was carefully revealed from beneath layers of tissue – I had seen photographs of this but not the original.  Graham also did other pieces inspired by the character in The Ingenious Gentleman Don Quixote of La Mancha (said by the 19th Century philosopher Schopenhauer to be one of the four greatest novels ever written), so it was clearly a story and a character he was drawn to. 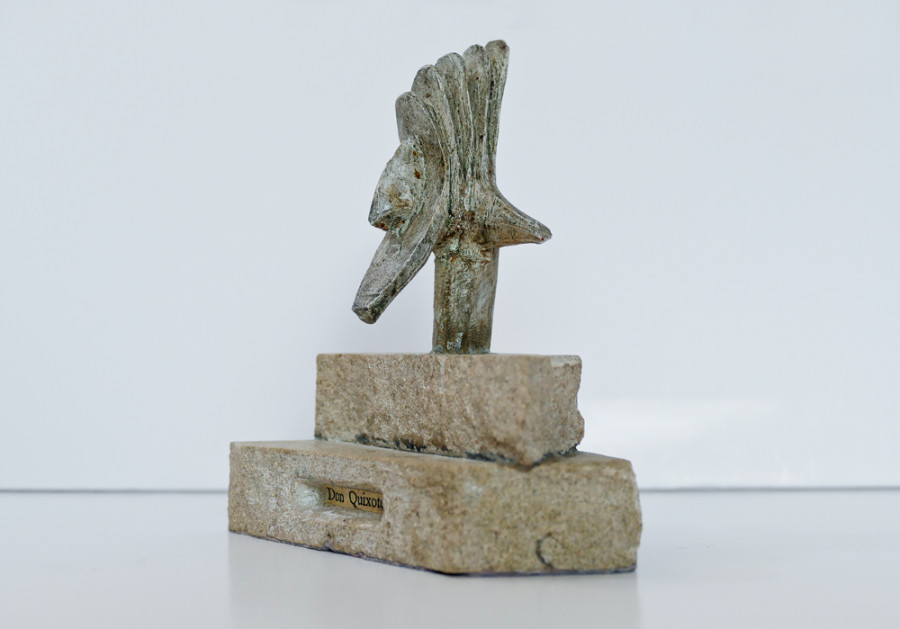 The down-to-earth stones (fragments from a graveyard, apparently) contrast with the disembodied ceramic elongated head, with its five layers, jutting out chin, long neck and nose. One interpretation may hinge on the character Don Quixote’s building-up of layers of false self-presentation, as he pursues impractical idealistic goals, becomes lost in books and stories of the imagination, while exploring the meaning of person vs. self and person vs. society.  These fantasies can also come to nought set against the reality of being in the present, represented by the finality of the graveyard inscription.

As Gerard was someone with whom Graham had many heartfelt and engaging discussions on a range of meaningful topics, it is pertinent that these two pieces from him are both about what is true, how to uncover layers of untruth to reveal the ultimate.  I asked Gerard if he would be willing to write a piece on his work, so he very kindly shared this – which insightfully and accurately reveals some of the influences and driving forces behind Graham’s work.

Amongst topics which came up, Graham refused to talk about politics and whenever politics was brought up by others in the group he would take out his book or notebook and start reading or writing!

The bulk of our discussions was centred around poetry, literature, art, artists and always with a spiritual emphasis. Graham was always busy with his relationship with God, including the nature of free will and determinism and the purpose of having come to this planet. Graham would often seriously question the absurdity of industry, utilitarianism (with its dislocation from the earth and the immediacy of being alive). The painting and little sculpture of Don Quixote needs to be understood within this context. As with Don Quixote Graham was equally a non-materialist. Graham also saw the technological industrialisation and electronic revolution as windmills that would further dislocate mankind from the earth and what is of true value (and make mankind think like pancakes).

Graham’s love for poetry and storytelling knew no boundaries. He was always busy exploring what is true of poetry in that it was his belief that truth cannot be known by means of the concretisation, flattening and factualising language determined by science, politics and the institutionalisation of word meanings.

Graham was drawn to the 19th century romantic movement and especially William Blake (poetry) and the paintings of Jack Yeats (brother to W.B Yeats, an Irish poet). For Graham, it seems that the truth can only be found in understanding the allegorical and metaphorical nature of poetry. Referring to painting which is, as with poetry, mainly abstract with images that are condensed and containing many different meanings. As with Seamus Heaney’s  poetry it refers to the digging of much earth to search and discover what is of true value in life.

Graham drew from many sources and muses. The poet Heaney was only one of these sources and it was my understanding that it was more Heaney’s purpose in his poetry that intrigued Graham, rather than anything specific. In essence, my familiarity with Heaney’s work is mainly dependent on what Graham told me – which was that it was the earthiness and emphasis on the images and symbols from agriculture and ecology in Heaney’s poetry that touched him, in the same way that William Blake’s poetry touched him on spiritual matters.

Graham had no difficulty in his own work to bring these two extremes in harmony. Heraclitus (500bc) once wrote; ” Those who search for gold, dig over much earth and find little”. In this sense “gold” has become a symbol of what is of ultimate importance; the ultimate treasure. With Graham this treasure, this gold had much to do with struggling for authenticity and to overcome anything that is phoney; and also other such treasures. Truth by means of understanding also, for Graham, included pleasure, playfulness and fun. He often read to us his fantasy stories, comical little poems (Haiku) and limericks. His love for poetry was endless.“

I am indebted to Gerard for sharing this rare commentary, and the works.

If there is one thing we might draw from this work, and these thoughts, it is what Seamus Heaney himself replied when asked about the value of art, particularly in difficult times – that it is precisely at such moments that people realise they need more to live than economics: -  “If poetry and the arts do anything, they can fortify your inner life, your inwardness.”