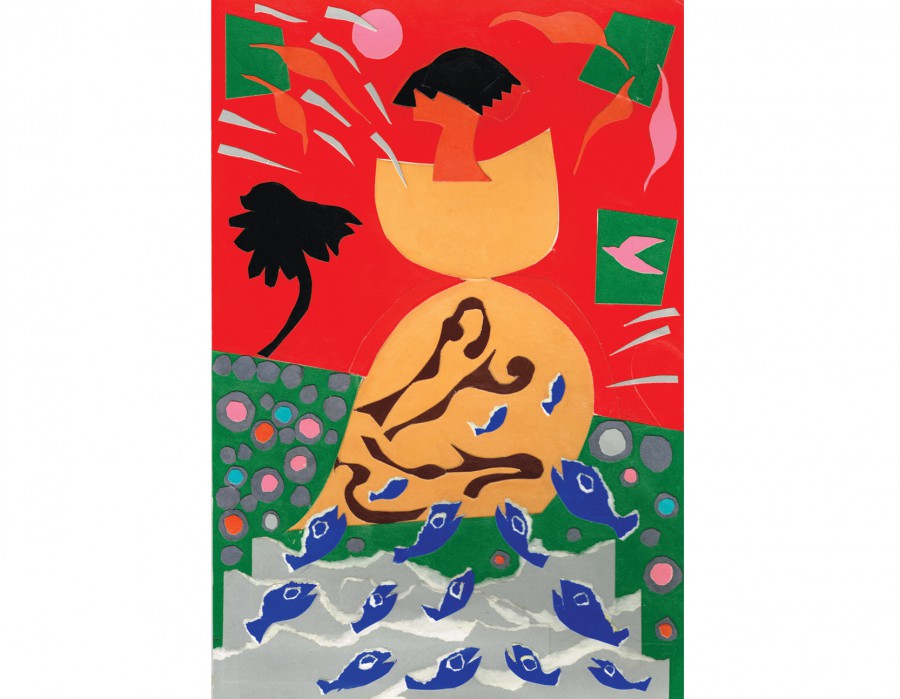 In celebration of having added 108 pieces of artwork to the database,  I have included this new image in the website’s  Cut Outs gallery.

One of a short series of  abstract and mythical paper “cut outs”, which Dad created, this  is entitled “Calypso” – a nymph in Greek mythology. Calypso as a mythical figure is remembered most for her role in Homer’s “Odyssey“  in which she keeps the fabled Greek hero Odysseus on her island for seven years to make him her immortal husband. She is also a figure who is associated with the Oceanids – sea nymphs who are patrons of a particular spring, river, sea, lake, pond, pasture, flower or cloud.

Here Calypso is  shown with twelve large fishes and 3 smaller fishes – so perhaps this is Calypso as patron of a particular water body. A diagonal horizon divides pink, blue and orange polka-dotted grey pebbles, on a green landscape with palm tree silhouette from a daringly hot red sky.  In the foreground, warm grey surf-edged waves lap at the hem of Calypso’s garment of golden ochre yellow, and the  fish jump out the water, appearing to honour, or be charmed by her.

A pink sun (or moon?), birds, leaves and water splashes populate the sky. Calypso herself, centrally positioned in the image,  is animated by an “s” shaped sway, and is simply and abstractly depicted. Her miniscule hour-glass waist is the dynamic centre of the picture, as the other pictorial elements revolve and swirl around her. The figure has a sense of power, as if Calypso is both activating and controlling or charming the energies of the natural world. Her flat black hair echoes the form of the palm tree, and her figure, (boldly shown without arms which we don’t miss, but imagine), has a captivating energy. It is a bold, confident, and joyful picture: one that enlivens and excites. The complementary colours of green and red, yellow and blue are put to good use to create that sense of vibrancy, and tonal contrasts add to this range.

Other visual metaphors and connotations spring to mind. Could the 12 fishes perhaps point to the idea of Jesus Christ and the 12 apostles? (One of Dad’s poems is entitled “Twelve Aggrieved Apostles” which I’ll share another time). There is an iconic aspect to the picture which lends itself to this aside.  The sandy coloured hour-glass shape of the figure might also be a visual metaphor for the passage of time (albeit subtle), bringing an extra dimension to the piece. The colour field of red may have an (unconscious) resonance with bullfighting, particularly as the shape of Calypso brings the arc of a spanish bull’s horns to mind – and Dad did paint a bullfight picture, influenced, as he was for a time,  by Picasso’s work on the theme.  On a more prosaic note, the pebbles on the beach here are perhaps a remembered reference to Westward Ho!’s  famous pebble ridge with its rounded grey stones, which Dad also painted, as in this example of a bandit painted in the round in the Objets d’Art gallery.

From an artistic point of view, we can, of course, tentatively mention Henri Matisse’s wonderful “gouache decoupe’s” as an influence on the cut outs, both in terms of colour, as well as technique. Somewhere amongst Dad’s work, there is a box which has all the remaining slivers and fragments of coloured cut paper, which lets us know that the colours are those of the paper itself – not, as in Matisses’s case, painted with gouache paint.  As with Matisse’s work, Dad has made use of the different qualities of both torn, fibrous edges of the paper, and sharp scissored lines and edges.

I hope you enjoy the image, as I do, and find it uplifting.