Hallelujah – it is done. 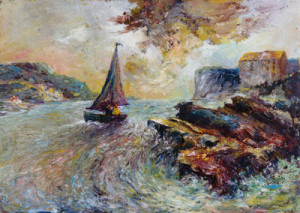 A yacht may only be able to travel at a slow speed, while navigating tides and winds, but through making  persistent steady progress, oceanic distances are travelled.

Since last writing, through illness, whirlwhinds, obstacles, and upheavals of one kind and another, I have now completed cataloguing,  scanning, photographing, or editing existing photographs and collating details for every discrete piece I encountered. For the visual artwork, this includes works that are extant, sold, lost, in private collections, or only known from a photograph. We now have a visual library of that, and a table of related data. Each piece has also been given a unique number, so it can be referred to easily.  Writings were dealt with separately in an earlier phase.

Having surveyed the territory (that Art History Degree from Edinburgh came in handy after all!),  we have reached the extent of every shore, so the interesting phase begins.

Chronology
Being able to see the works in the (rough) order they were produced over time, is a good way to start to answer some of the other questions, so we’ve made a start on organising and extrapolating that information to make this possible.

One thing that has become apparent in beginning to do so with Graham’s work, is that certain types or styles of work were produced in a limited and intense period of time, and then not revisited – this seems to apply, for example, to the Painted pebbles, the Tiles, and Breadboards. These were all more or less produced during the years 1991 – 1995, when Graham was living in Elm Grove, Bideford.

All the design work was produced during the years 1986 – 1988, as Graham was involved with a local project advertising community services and produced pieces for it.

Sculptural work, on the other hand, continued to be produced now and then in different media (slate, wood, plaster casts) from 1970 – 2008 or more. Similarly, painting, whether in oils (early phases) or in acrylics were produced over the whole period of Graham’s activity as an Artist, so they present a little more of a challenge in dating works. Happily, some series of works, because of how they were physically stored (for example in the same wallet) can be easily recognised as having been produced at a similar time. There is a series of “Abstract Landscapes” to which this applies, that are yet to be illustrated on the website.

On the importance of chronology and being able to see things in context, I am reminded of how David Hockney  in his book “Secret Knowledge: Rediscovering the lost techniques of the Old Masters” describes how he discovered that optics (such as the Camera Lucida) were used far earlier and more extensively in western art than thought. He did this by creating a large visual display of postcards and images of prominent works in art history, arranged chronologically on a wall. Seeing this clearly, he was able to perceive and make the connections and similarities which led to this conclusion.

Doing this curating work is a bit like being a detective, looking for clues and investigating beyond the obvious. I hope to gain understanding and insight in studying the work, in order to piece together the story of Graham’s (Dad’s) creative endeavours and be able to interpret those for others to enjoy.