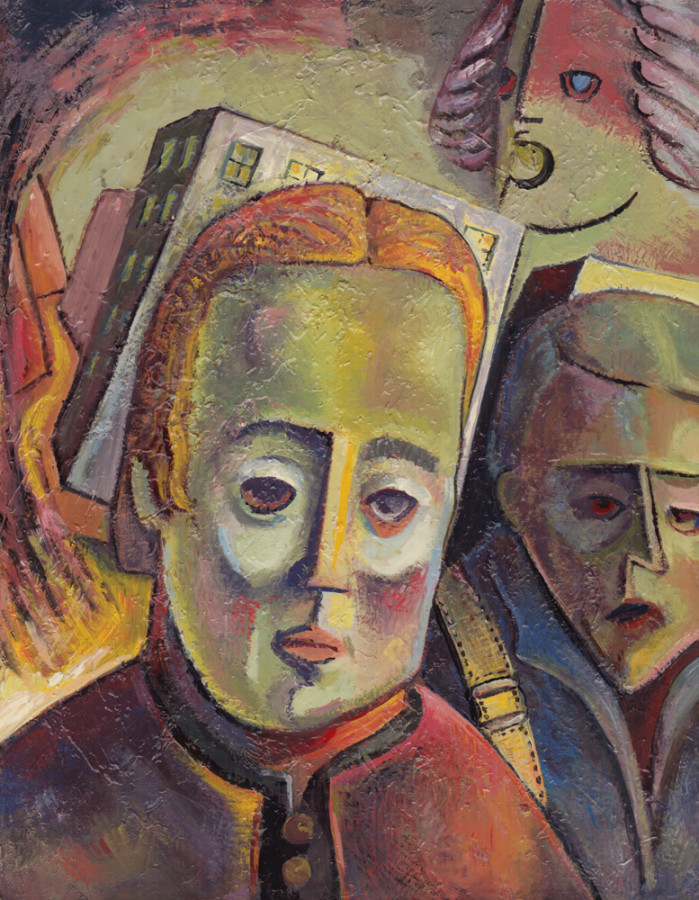 Just as words need to be read or heard to carry meaning from one mind to another, so too do paintings need to be seen by another to come alive.

The Artist’s act of creation is one of expressing from within, in order to have reflected back something that is, in some senses,  beyond oneself. The vehicle for this (ideally) transcendent communication is the paint, the word, the sound – and in the process of making, writing or composing, a new reality that was hitherto unknown comes into being.  Having created, the work is – to the Artist -  done with. It carries the living energy of the process, but has crystallised as product – visible for others to consider and relate to. 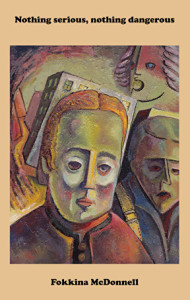 Graham’s painting “The Departure” (unseen for several decades) has happily re-entered the world as a printed image on a book cover to accompany work by the Poet and Writer Fokkina McDonnell. Fokkina’s second poetry collection “Nothing serious, nothing dangerous” has been published by  Indigo Dreams Publishing Ltd. Without needing to put anything into words,  we catch the connection of the image to the title, and are encouraged to open the book and explore the poetry.

In the poem “Ferry crossing” we read:  “a white ferry is a city where nothing is permanent” which also chimes with the mood of the painting. Happy that the relevance of the painting on the cover is confirmed, we feel able to look at it in more depth when we pick the book up again.

What is it? What does it mean?

When viewing a work of art, we find ourselves asking “What is it?” and “What does it mean?”  We initially respond emotionally, kinaesthetically. Then we may notice particular details which may have meaning for us or remind us of something. We may lack confidence in being able to make a “correct” (or any!)  interpretation, or see it as the artist intended.  Sidestepping the tendency to conclude that we “like” or “don’t like” it, we can look more closely.  Paintings can of course, be references to actual or specific events – but in this case, the work is most likely archetypal, but clearly intended to tell a story, or describe a situation.

We see two male figures heading towards us, departing from a town which has large geometric urban buildings which are perhaps toppling over, painted, as they are, at angles. There is a fire on the left, with smoke billowing into the sky. The figures are quite in contrast: the larger full-faced figure has a tall forehead, a mainly oval head,  longish yellow hair with a central parting, a red/orange cloak, and what looks like an eastern-inspired black shirt with buttons beneath. This person has the slight air of a leader, perhaps a religious, or authority figure, and displays a tight-lipped mask-like response to the situation, resigned, but also determined.

The man depicted on the right wears a high-collared coat, and carries a bag with leather strap. His face is depicted with sharp angles at chin, nose, the eybrows are slightly furrowed, the eyes downcast in thought, the mouth open, the hair is parted on one side. The impression is one of greater distress, of reticence and foreboding.

So far, we can be content in interpreting the scene as two men (of uncertain origin) leaving a burning town (for some reason). Then we see on the top right a floating (perhaps female) head delineated in black, with a wide open mouth, and what could be hair – or could be feathery wings to the sides of the head. Is this an angel singing blessings? A symbol of women ravaged in war? The cry of those left behind, or already gone? Is it a representation of what is being left, and where the figures are going, as we see the two sides of the head with different coloured eyes? We can’t know for certain.

We can, however, dream a little as we put the parts together and imagine what story the work may be communicating. Exploring options allows us to tune in to the emotional tones of the work and to recreate the felt-sense which the Artist himself began with.

I asked Elizabeth (Mum) about what led Dad to paint the piece. Her response?   “Graham would just paint what he felt: he would get a feeling for something, then an image would appear in his mind, and he would paint it from imagination“.  So the starting point for this piece may have been a feeling of shock, or loss, or resignation, fear… take your pick. 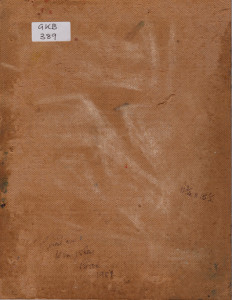 No doubt, too, in the process of painting, the hand will have drawn on resonant memories. For this work, I will mention that Graham lived in Hull as a child in the 1930′s and during World War II was evacuated with his older brother Gordon to the nearby town of Beverley, leaving his mother and 2 siblings behind. The wartime evacuations dubbed “Operation Pied Piper” led to  more than 3.5 million people being relocated. Children were summarily put on trains, with just a gas mask and a suitcase or bag and posted to an unknown future:

“Finding homes was often traumatic for the children.  As a rule, billeting officials would line the newly arrived children up against a wall or on a stage in the village hall, and invite potential hosts to take their pick. The phrase, “I’ll take that one” became a statement indelibly etched in countless children’s memories.”

On returning to Hull after the war, the family moved house, as the whole street was in ruins after being bombed. One can imagine such an experience would have left it’s mark.

But we should not conclude that this is the sole rationale for the painting – merely one of many echoes. Other memories will have filtered through, working as Dad did, solely from imagination.  Whilst living in southern Ireland, there was a dramatic fire in a farmyard barn, and all the local people, Dad included, were called in to help quench it, for example. (I was on the sidelines, watching). And the leather strap with buckle may have been a familiar detail from Dad’s experience as a part-time postman, carrying a heavy bag in the narrow steep streets of nearby Appledore, which he was doing at the time.

There is more that could be said, particularly about style and technique, but bearing in mind Dad’s “Partial Truth” (no. 71 of his 109 short pithy writings), that “The more naturally ‘beautiful’ the work of art is, the less description and verbiage should be needed, yet the coarse or charmless object can be transfigured and beautified by the imagination and language.” -  I will leave it there!

I hope these few biographical pointers allow the reader to engage with the work, and indeed with Fokkina’s poetry.

Purchase “Nothing serious, nothing dangerous” here.  And if you would like  to order a print of the painting please get in touch.