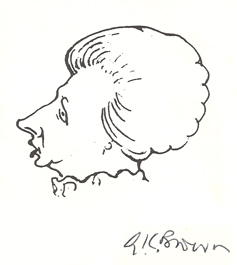 Here’s a little timely gem of a thing I came across today: a cartoon of Margaret Thatcher, (Britain’s first woman Prime Minister) who recently passed away. See the Wikipedia entry for a biography, and a profile photograph from 1990 is on that page. This drawing is above cartoons of Neil Kinnock, Labour Party Leader and Paddy Ashdown, Liberal Democrat Leader (or they might have been called the SDP at the time?) as well. The year was 1989.

The caricatures by Dad were featured on one side of the euro-election leaflet for the Green Party candidate in North Devon, his son-in-law at the time, Peter Christie. The headline, with a photograph of Peter under “Green” and the caricatures under “Grey” read: “Vote Green…not Grey”.