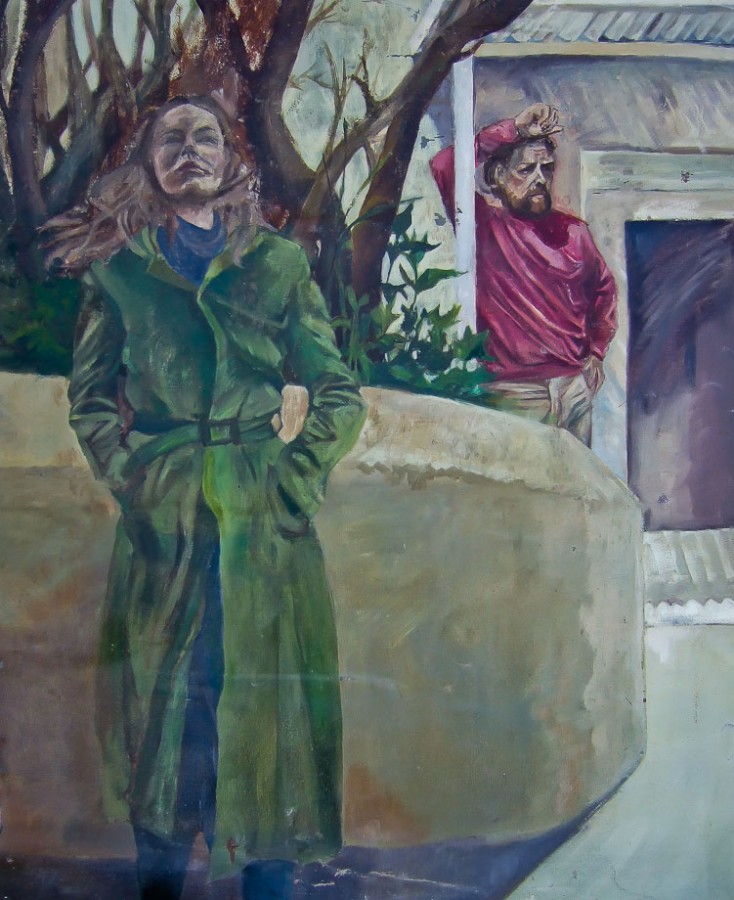 Here’s an historical curiosity I’m prompted to share after watching a programme on Whistler’s painting, “The Artist’s Mother” last night.

This is the first painting I did when I went to (Edinburgh) Art College in 1980 – a self portrait with Dad in the background, at the door of the house in North Devon I’d just left home from. I still have the canvas, cut from the frame, its about 45x60cm.The struggle for independence,  self-definition and discovery in relation to the parent is here demonstrated on canvas at a key point in life, leaving the “nest”.  (Of course in Whistler’s example, he’s reduced his visual presence to the butterfly symbol, so the work differs in that respect – as well as in artistic quality, of course!).

This painting was based on two photographs: one I had of Dad, in the pose shown and another of myself taken by my then boyfriend, Dean. The latter was just a black and white head image, taken from below, looking up at the sky, so there was a bit of work to create the rest of the piece.

When I see it now, it says so much – the contrast of red and green, the simplicity of the lower part of the canvas set against the complexity of the top half, where all the action happens;  the relationship of the figures looking in different directions, the contrast of cold, windy and dark on the left with the bright sun on the right. The positioning of Dad at the door, myself outside on the street. And the sense of inner struggle to hold on and to go at the same time.  Fascinating to see one’s younger inner-self trying to express, and capture, what was inside at the time.

Having explored this painting with you -  I now see that the front page of this website, again has that same, much developed, contrast of red and green.  Dad often wore bright coloured jumpers, that red jumper in the woodcarver image, set against the photo of myself (taken by my current partner Adrian) in green.

One Response to “Like father…like daughter? – Arrangement in red and green”